The spider is a nuisance pest, probably more because of its webs than the spider itself. Because it is usually the spider most often encountered indoors, it is referred to “Common House” spider.

There could be more than one sac in the web at a time and a female house spider may produce up to 17 sacs with up to 250 eggs in each silken sac. The female could lay a total of more than 3,760 eggs, in her lifetime. The eggs hatch in about 7-10 days. Adults may live for a year or more.

Reduce clutter in basements and garages to eliminate hiding spots for spiders. When spider webs are visible, use caution before putting your hands or feet in that area. You should also wear heavy gloves when moving items that have been stored for a long period of time and shake out shoes before wearing them. Outdoors, store firewood at least twenty feet from the home and five inches off the ground. Seal cracks on the outside of the home, and screen all doors and windows.

Giant house spiders are commonly confused with the Hobo Spider and you have to look at their underside to tell the difference.

The webs built by the giant house spider are flat and messy with a funnel at one end. Webs are built in corners (on both the floor and ceiling), behind cupboards, in attics, and in basements, between boxes, or any other area that is rarely disturbed by large animals or humans. They can often be found near window openings.

This spider lurks in the funnel until a small invertebrate happens to get trapped in the web, at which point the spider runs out and attacks it

The presumed method of expanding its distribution by hitching rides with humans along major highways in the Pacific Northwest is how the name came to be. Being introduced from Europe in the 1930s the Hobo spider has become established in at least 6 states since, displacing many native spider species as it spreads

They build funnel webs that are open at both ends with one end expanding outward into a broad, slightly curved sheet. An escape tunnel is commonly built in the back of the web which leads to a deep crack or other protected area. Males seek a mate from late June to October. Several roving males may in fact enter the ground level of a structure each day during the peak activity period in August and September. Male hobo spiders are responsible for more bites than female hobo spiders because this wandering habit brings them into contact with humans. 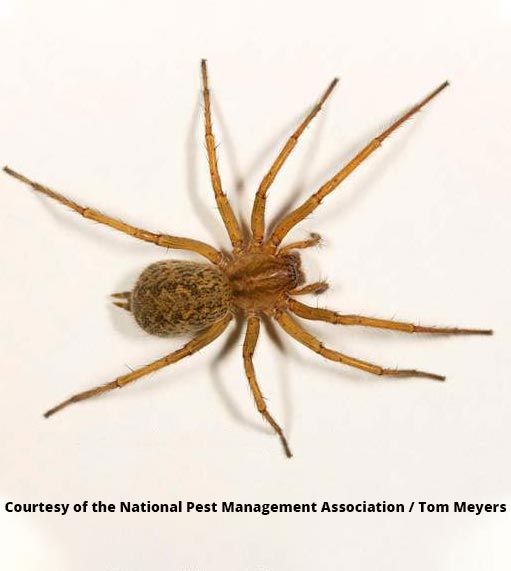 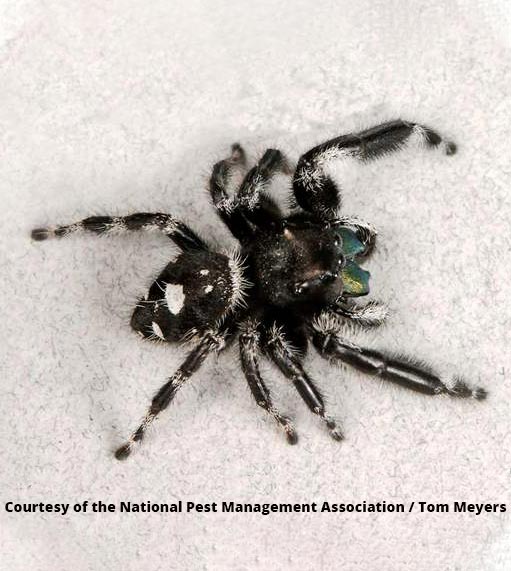 The jumping spider obviously get its name from it’s jumping ability, which it uses to catch prey. With more than 4,000 known species of jumping spiders in the world, there are about 300 species found in the United States and Canada, including the zebra spider. Jumping spiders are commonly mistaken for black widow spiders due to their compact black bodies with relatively short legs. However, jumping spiders can also be brown, tan or gray in color with pale white, gray, yellow, red, blue or green markings. Adult jumping spiders range in size from about 1/8-3/4” (4-18 mm) and are typically covered in dense hairs or scales that are brightly colored or iridescent. Their front legs are usually thicker and somewhat longer than their other legs.

In general, jumping spiders have the best vision of any spider species, being able to detect and react to movement up to 18″ (45 cm) in distance. However, their night vision is very poor. They have eight eyes in three rows. The front row has four eyes with a very large middle pair.

Orb Weavers come in a variety of colors, shapes and sizes. Common traits among some include the rounded abdomen and orange-to-brown and brown or black coloring – those this colors may vary per species. Legs of an Orb Weaver are generally very long, giving it a menacing look, and their overall body size can range from 6mm for males and up to 10mm to 20mm for the females.

Habitats can range from tall grasses to corners of homes or under protected porches. Their webs a stage and the Orb Weaver sits in the middle, head facing downwards, waiting for prey to come upon their net. If the spider is not in the middle of the web, it is usually nearby monitoring the web by way of a “signal” line still attached to the spider. The moment a prey gets entangled in the sticky web, the signal line vibrates and the spider comes out to finish its work.

It is reported that Orb Weavers will re-spin a new web every night. Their proficiency at nighttime hunting and propensity to enjoy insects makes them a great aid in lowering mosquito populations. 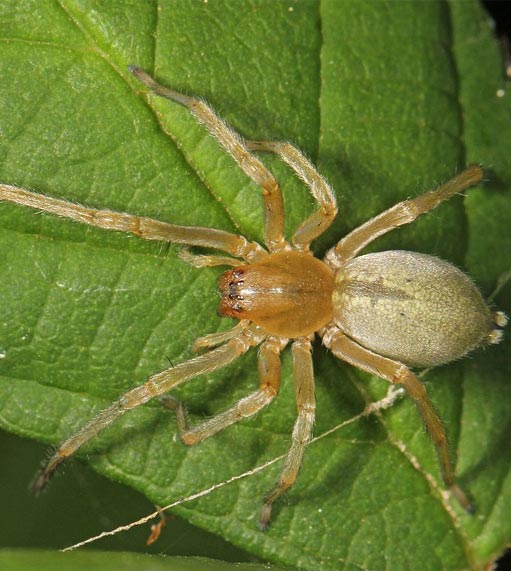 Yellow Sac Spiders are light yellow to pale yellowish green, sometimes with a orange-brown stripe on top of the abdomen. The cephalothorax (fused head and thorax) of the Yellow Sac Spider is orange brown to reddish and the abdomen is pale yellow to light grey. An adult female sac spiders body is typically 1/4 to 3/8 inches long and its leg span is up to 1 inch.

Males are more slender, with a slightly larger leg span. The first pair of legs is longer than the fourth. Yellow Sac Spiders have eight similarly-sized dark eyes arranged in two horizontal rows.

Yellow Sac Spiders take shelter in flattened silk tubes during the day and move about to hunt during the night. Yellow Sac Spiders often live in houses and can frequently be found crawling upon walls or other vertical surfaces. Most sac spiders found indoors like to live in and around plants. Yellow Sac Spiders construct a silken tube or sac in a protected area, such as within a leaf, under landscape timbers or logs, or at the junction of a wall and ceiling and they use this sac as their daytime retreat. This is how the Yellow Sac Spiders derives its common name, sac spider. These spiders do not build webs.